There was a comment to my post about adding iAds to an application that got me thinking about an improvement to the way I handle the iAd BannerView. The comment was about moving the app to the background, entering airplane mode and then moving the app back to the foreground. That is just one example of the more general problem of changing network connectivity. The problem comes after you have successfully requested and received an Ad and shown the banner view. If at that point network connectivity is lost the banner view is left on screen. If the user clicks on the Ad banner they get a network connection error which is not exactly a great user experience. 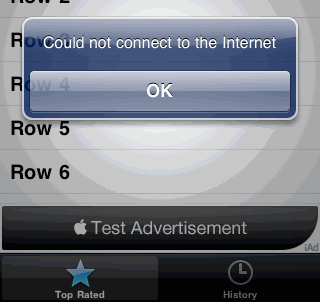 The network state of an iPhone can be be monitored using the SCNetworkReachability interface of the System Configuration framework. Apple provides the Reachability sample application as an example on how to implement the framework which makes it trivial to add to an existing app. The example app was recently updated for iOS 4.0 so if you already have a copy it may be worth checking you are using the latest version (v2.2). 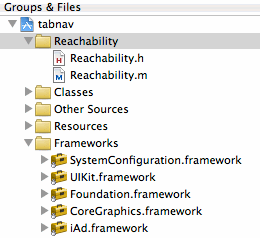 The Reachability class provides a convenient wrapper to the SCNetworkReachability interface. To start using it we just need to add an ivar to the application delegate to hold a reachability object and then start the notifier when the application first launches (existing code not shown):

With the reachability class initialised we can use it in our view controller to check the reachability status and control when to show and hide the iAd BannerView. First I will add a helper method to query the Reachability object to determine if we currently have network connectivity:

This method first retrieves the reachability object we setup in the application delegate and then uses the currentReachabilityStatus and connectionRequired methods to determine network connectivity. There are several possible situations since the device may be connected via WiFi or via the cellular network. Also the cellular network may be available but not actually connected.

We can now use this method to determine the network status when our view controller first loads. If we already have network connectivity we can go ahead and create the iAd BannerView immediately. In addition we will initialise an observer to listen for reachability changed notifications generated by the Reachability class. Each time the network connectivity of the device changes we will get a call to the method reachabilityChanged that we specified when creating the observer:

Note that whenever you add an observer for a notification you need to ensure to remove the observer when your view controller is deallocated:

To finish up we just need to implement the reachabilityChanged method that is called whenever a reachability notification is received:

This method determines the current reachability status using the helper method we created earlier. Then if the network has just become reachable and we do not currently have a bannerView it is created. Alternatively if network connectivity has just been lost and we currently have a bannerView it is hidden and released. This means that during the life of the application we will add and remove the bannerView as the network connectivity changes.

There are several different strategies we could have used here that would achieve the same result from the users perspective. For example, we could always create the bannerView in viewDidLoad and then call hideBanner and showBanner in reachabilityChanged instead of creating and releasing each time.

To test that everything is working you can try it on a network connected device. Once the test iAd banner appears you can disconnect the network connection using the settings application (or use airplane mode) and you should see the Ad disappear. Likewise when you restore connectivity you should eventually see a new ad banner.

One other enhancement I considered adding was to release the BannerView when the app is switched to the background and recreate it when moving back to the foreground. This is easy enough to implement by having our view controller listen for UIApplicationDidEnterBackgroundNotification and UIApplicationDidBecomeActiveNotification. However when I checked the background memory usage after releasing the bannerView I found it made very little difference so I have left this out of the sample app.