Running your tests with different environments, localizations and sanitizers is a good way to catch more bugs. You can use schemes to create the different configurations but that quickly becomes unmanageable.

Apple added test plans to Xcode 11 to make it easier to rerun tests with varying test configurations. Here’s my notes on how to get started with test plans.

What is a Test Plan?

An Xcode test plan provides a way to run a selections of tests with various test configurations. The test plan is a JSON file with the .xctestplan extension that you add to your Xcode project and reference from a scheme. It has three main elements:

What Are They Good For?

Some possible uses for test plans:

If you’re already doing some of the above by creating different schemes you may find you can consolidate into a single scheme with one or more test plans.

You create a new test plan from the Xcode menu Product > Test Plan > New Test Plan.... If you have an existing scheme you can convert it to use test plans. From the scheme editor, select the Test phase and use the Convert to use Test Plans... button below the tests: 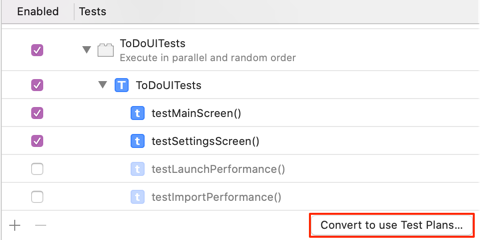 Alternatively, from the Xcode menu: Product > Scheme > Convert Scheme to use Test Plans. Either way you get to choose from three options: 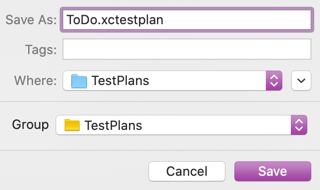 If you look at the scheme now you’ll see it lists the test plan where the tests used to be: 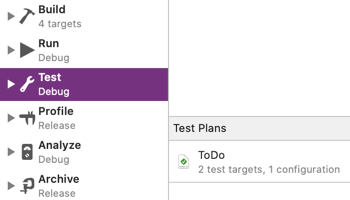 You can add multiple test plans to the scheme, each with a different selection of tests and configurations.

Let’s look at some examples of how we might use test plans. Here’s the three test plans I’m going to create: 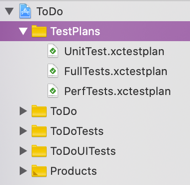 I’ll run all the tests in parallel (and random order) except the performance tests. See Random and parallel tests for a recap of these test options.

I’m starting from the scheme editor with a scheme with no test plans. Select the test phase and use the “+” button at the bottom to create an empty test plan: 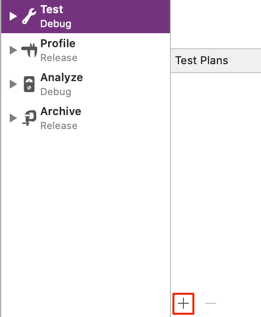 I named the test plan UnitTest and saved it to the TestPlans directory in my project. Xcode lists the new test plan in the scheme editor as the default:

You can close the scheme editor at this point and click on the test plan in the Xcode navigator. The test plan is empty so the first step is to add one or more test targets. My project has both a unit test and UI test target. I only want to run unit tests but I’m going to add both targets. Use the “+” button at the bottom of the test plan window to add the targets:

Why add both targets? If I don’t have the UI test target added to the current test plan Xcode doesn’t allow me to manually run any of the UI tests from the source code editor:

Adding all my test targets to the default test plan doesn’t mean that I need to have of the tests enabled. I can disable all the UI tests for this test plan (this doesn’t stop me from running them manually from the source editor):

I want to run the unit tests in parallel on the simulator. That’s an option you can change for each test target in the test plan:

With the tests selected, click on the Configurations tab. A new test plan has shared (default) settings and a single configuration named Configuration 1. Start with the shared settings. Settings which differ from the defaults show in bold. I changed the execution order to random and enabled the address and undefined behavior sanitizers: 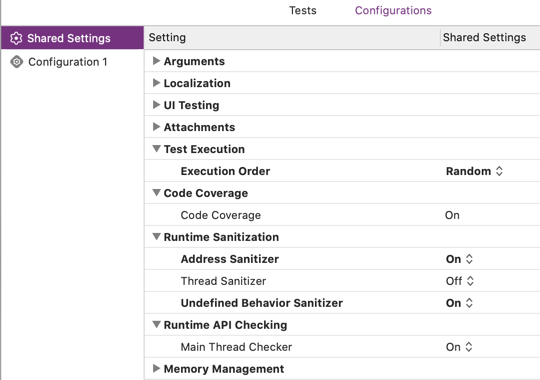 We only need one configuration for this test plan which will have the default settings. I changed the name to make it clear it uses the address sanitizer: 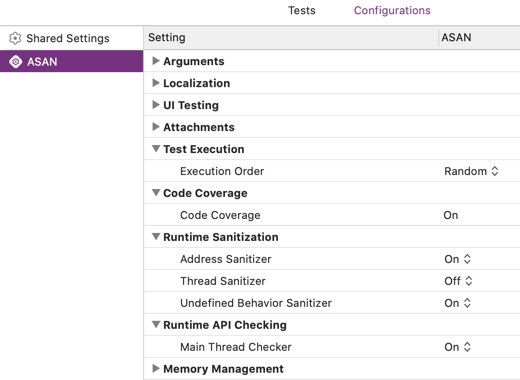 Following the same steps I added a second test plan named FullTests to the scheme. This time after adding both test targets I deselected the performance tests from the UI test target: 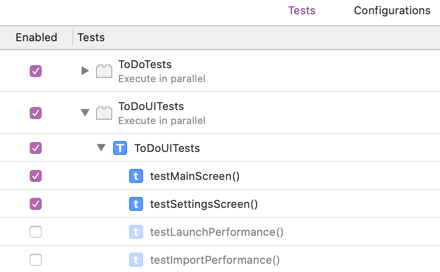 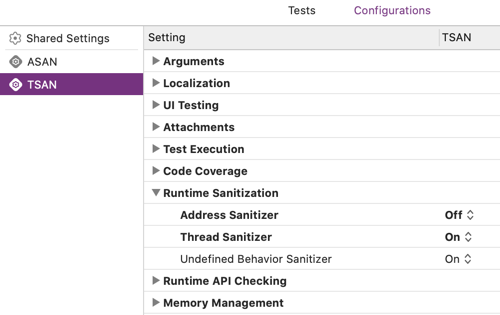 The selected tests will run with both the ASAN and TSAN configurations. 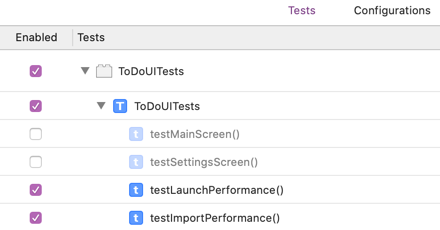 I have a single configuration which has all of the sanitizer and diagnostic tools turned off: 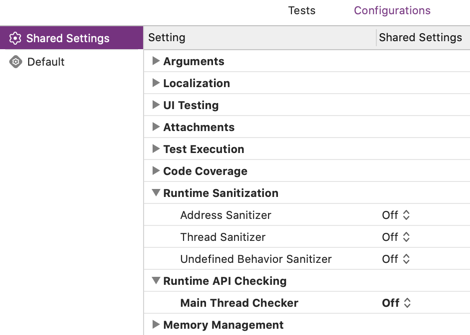 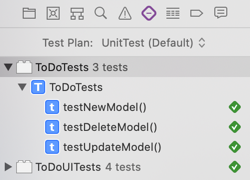 One thing to be aware of if you are working with a test plan with multiple configurations. If you manually run tests from the source code editor Xcode will, by default run the test(s) for all configurations in the test plan. You can option click on the test to choose a single configuration if you prefer.

The report navigator shows the results for each configuration organised by test target and test: 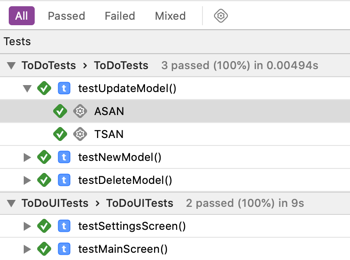 From The Command line

My preference is to have a default test plan with all test targets that runs a selection of tests with a single configuration. I then either switch test plans or use the command line to run more extensive or specific test plans.

To run a different test plan: