The rapid pace of change in the world of iOS development means that it is easy for old projects (which is just about anything more than about 6 months old) to get left behind. Each time a major new version of iOS is released there are SDK methods which become deprecated and project and compiler settings which if not obsolete may no longer be considered best practise.

A new feature added with Xcode 4.1 makes it easier to check a project for outdated settings and if you choose update any that are considered to be issues. If you have a project that Xcode considers is in need of modernization it will flag the issues the first time you open the project. You can use the Issue navigator to see the issues and bring up a dialog window showing the full details similar to the one below: 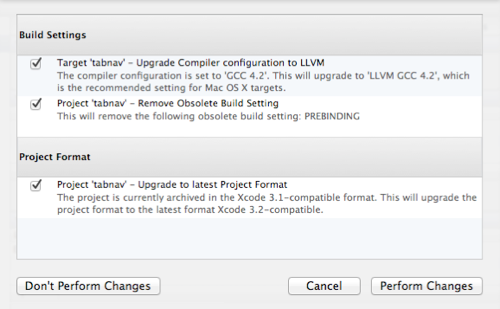 If you decide you do not want to make the change right now you can deselect individual changes. This removes the project issue until you run the Modernize Project command again using the button at the bottom of the project settings page or from the menu (Editor > Modernize Project).