My quickly assembled notes from the WWDC keynote today with emphasis on what is new for the iOS developer. These notes are based on the public keynote and information on the public Apple website only. If you missed it the WWDC 2013 keynote is already viewable on the Apple website.

Live Streaming of the Keynote

The keynote was streamed live this year both on the Apple web site and to the Apple TV where an Apple Events channel magically appeared overnight. If my memory serves me correctly this is not the first time Apple has streamed an event but it sure reduces the pain for those of us without a WWDC ticket. Hopefully we will also see a timely release of the WWDC sessions coming up this week through the WWDC App. 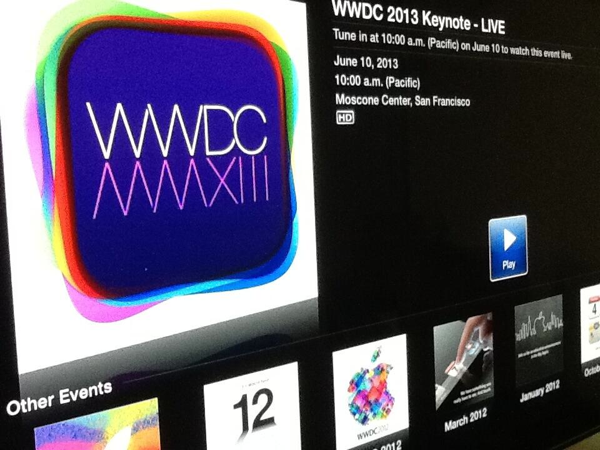 It was good to see Mac OS X getting some love though it will take me some time to get used to the non-cat naming. Since Apple had pretty much exhausted the list of big cats to name new OS X releases they have switched to places in California. Mavericks is a well known surfing location in Northern California. It will be available in the fall and looks to be a mix of a cleaned up UI and some under the cover tweaks. Two features caught my eye as being useful to developers:

At long last Apple has brought iBooks to the Mac. I should say I do not plan on doing a lot of personal reading on my 27" iMac. I do however make frequent use of iBooks on my iPad to refer to reference books and having my notes and highlights sync’ed to all devices including the Mac makes this much more useful.

The other feature that caught my attention was the support for multiple displays. I should clarify that by saying that OS X Mavericks will finally take “full advantage” of multiple displays. Each display will now have its own menu bar and access to the Dock. You can also independently full-screen an app in each display without reducing the second screen to a display of linen.

Tim Cook introduced iOS 7 as the biggest change to iOS since the introduction of the iPhone. As was widely predicted the Jony Ive led redesign has adopted a flat design with all traces of stitched leather removed. It seems that transluceny and parallax (tilting the device allows you to see the background behind icons) are the new fashion. It will be interesting to see the impact of this new design style for developers who have built custom controls to replace standard UIKit controls.

The installed base for iOS 6 now covers 93% of all devices with iOS 5 now present on just 6% of devices. This is really good news for developers who are wondering when they can adopt the latest features of iOS. Apps will also update automatically in the background on both iOS and the Mac.

iOS 7 has 1500 new API’s but as usual for the keynote there was not much detail for developers. Some of the major changes such as the extension of multi-tasking to all Apps got a mention. For the rest it was down to the usual quick peek on a Keynote slide: 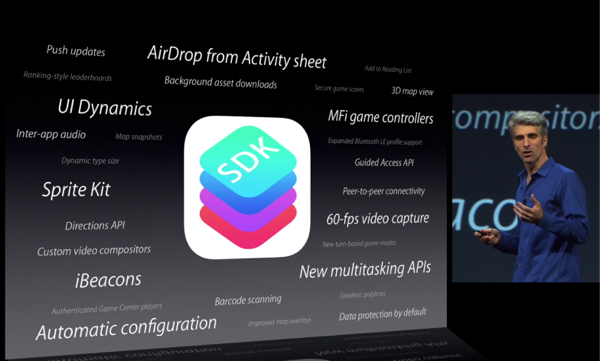 Supported devices for iOS 7 were announced as follows:

The original iPad did not make the cut but I am glad to see that the iPad 2 is still hanging on.

One of the more intriguing pieces of news today was not even mentioned in the keynote. The OS X preview page for OS X Mavericks has this snippet of information:

The new features in Xcode Server make it easier than ever for a Mac or iOS development team to create robust, reliable software, thanks to continuous integration, testing, and repository hosting services.

It looks like Xcode 5 is coming with a Jenkins-style continuous integration server that will run on Mac OS X server. A tip of the stovepipe hat to Graham Lee (@secboffin) who was the first person in my Twitter stream to spot this.

One interesting closing detail. The initial iOS 7 beta is available today but only for the iPhone. It was not shown on the iPad during the keynote but a beta release is “coming in a few weeks”.