Well I guess 1Password Pro should be congratulated for being the first iPhone App that I own that shipped a Universal version that will work on iPhone, iPod Touch and iPads. In doing so they reveal another way in which Apple is encouraging developers to adopt the format: 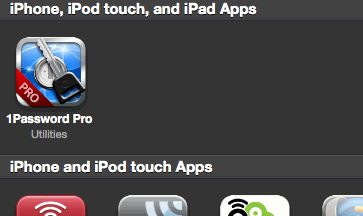 The Universal apps appear in a separate section with the iPhone only apps relegated to a lower section of the screen like poor cousins. As more Apps make the jump across the dividing bar it will only increase the pressure on developers to do the same. Of course that will be easier when developers in the rest of the world can actually get their hands on an iPad.

It is also interesting to note that there are now three versions of 1Password available. A low cost version and a Pro version both of which are Universal and an iPad only version. This tends to fit my impression that iPhone only apps will over time disappear unless they make use of iPhone only features (like a camera). One data point does not make a trend but I still think Universal + iPad HD versions will be the way that most developers go.