It has been a long time since I posted about about iPad Modal View Controllers. The last couple of years has seen the introduction first of iOS 5 and storyboards and now iOS 6. This has in turn seen the old methods for presenting and dismissing modal views controllers discouraged and now formally deprecated. So I think it is time for a quick update on what has changed and how to migrate old code.

In the good old days of iOS 3.2 and iOS 4 if you wanted to create a modal view controller you would do so with code that looked something like this:

This code fragment is taking from the old iOS 3.2 era post on iPad Modal View Controllers but is fairly typical. The user interface XIB file is first created by Interface Builder and then used to instantiate the new view controller. 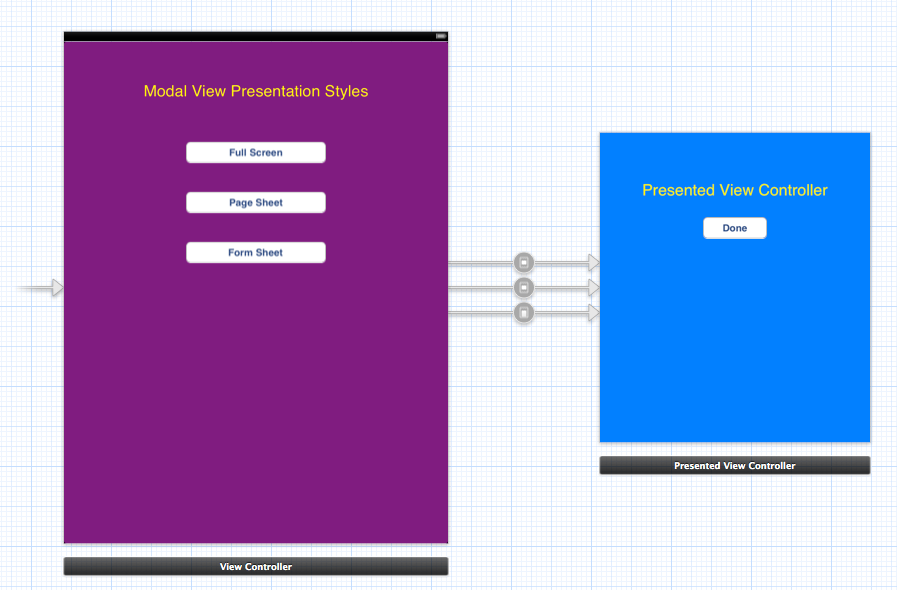 The root view contains three buttons each of which is wired to trigger a different modal segue to the presented view controller. The three segues have unique identifiers and specify both the modal presentation and transition styles in the storyboard. For example here is the storyboard segue for the full screen button: 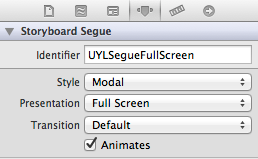 The page sheet segue which is full screen height but uses the portrait screen width when in landscape is specified as follows:

Finally the form sheet segue which uses both a view height and width smaller than full screen is specified as follows:

If you are not using storyboards and creating a separate NIB file for the presented view controller you will need to implement a method for the various UIButton actions that creates and presents the new controller manually. For example, the method triggered when the full screen button is tapped would look something like this:

Note the call to presentViewController:animated:completion:. The completion argument can take a block which is called after the viewDidAppear: method of the presented view controller. Specify NULL if you do not need the completion handler.

The UYLPresentedViewController class defines a protocol that we expect all users of the class to adopt. It has a single mandatory method that will be called when we determine that the presented view controller will be dismissed. If you need to pass data back to the presenting view controller you could add an argument to this method. The public interface definition of the class includes a weak reference to the delegate.

The done button in the presented view controller is then wired to call the following action method when it is touched:

The presenting view controller needs to adopt the protocol:

It also needs to set itself as the delegate which is not something we can do directly in the storyboard. Instead we need to implement prepareForSegue:sender: as follows to retrieve the newly instantiated view controller and set the delegate:

With the delegate set we can complete the implementation of didDismissPresentedViewController.

As of the time of writing this post the presentModalViewController:animated: and dismissModalViewControllerAnimated: methods do still exist in iOS 6 but are deprecated and will generate Xcode compilation warnings. If you are starting a new project today and you can target iOS 5 or later you should just use the new methods. Likewise if you have an existing app that uses the deprecated methods now is a good time to think about updating assuming you no longer require iOS 4.

If you have already made the switch to using storyboards for the user interface you may find that you have already eliminated the calls to presentModalViewController:animated:. As I showed above the storyboard takes care of instantiating and presenting the view controller for you.

As was pointed out in the comments the code as originally posted for dismissing the presented (modal) view controller from within the presented view controller contained a mistake. The dismissViewControllerAnimated:completion: method should of course be called on self.presentingViewController. A further comment pointed out some unnecessary code in the didSelectDone method that was checking the value of self.delegate which is unnecessary since a method call on nil is harmless. The code snippets in the post have been updated accordingly.