The WWDC 2015 session 218 Mysteries of Auto Layout, Part 1 makes a bold claim for the UIStackView class introduced in iOS 9:

Start with Stack View, use constraints as needed

At first glance the stack view is a simple class that allows you to layout views in either a column or a row. What makes it powerful is that it applies Auto Layout to the views without you having to add the constraints. You can also embed stack views in other stack views to build up complex layouts with hopefully minimal Auto Layout pain.

For example, the Storyboard below has two horizontal rows of views centered in the superview and pinned to the top layout guide: 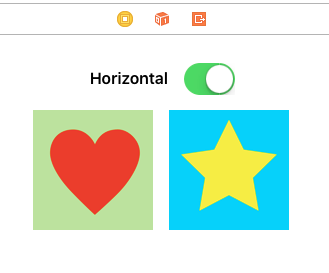 This is not so complicated a layout but manually specifying the constraints either in Interface Builder or in code is still non trivial. To layout this view with stack views:

For example if we connect the UISwitch to an action we can animate switching between a horizontal or vertical layout of the image views:

The updateConstraintForAxis function just sets the axis of the stack view containing the two image views:

The animated gif below gives you an idea of how this appears:

The full sample Xcode project is available in my GitHub repository.