I’m starting from a small Xcode project with some Core Data helper code collected into a sub-folder: 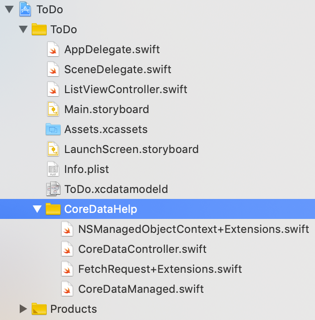 My plan is to extract the Core Data code into a Swift package so I can reuse it between projects:

A Swift package is made up of a collection of source files and a manifest file (Package.swift). The manifest defines the products (libraries or executables) built by the package, any dependencies on other packages, and the build targets including any test targets.

For a simple package, you probably will not need to change the default manifest. I added a minimum deployment version for iOS:

I recommend watching the WWDC sessions for further details. The full manifest file for reference (the swift tools version will depend on the version of Xcode used to create the package):

To share the package, we need to extract it from the existing project and create a remote source control repository:

At this point, we’ve published our Swift Package. If you update the package, remember to increase the version number when pushing the changes to the remote repository.

To use the package, add it as a dependency to an Xcode project:

Xcode 12 added the ability to add resources to a package. See this later post for details:

I recommend watching the two WWDC 2019 sessions on the Swift Package Manager. The first session covers using Swift packages, the second covers how to create and share your own:

If you’re interested in doing more with Swift Packages on the command-line see this talk by Ellen Shapiro (@designatednerd) at Hacking with Swift Live 2019: