This is the last in a series of posts on my notes on migrating from an existing iPhone App to a universal app that will run on iPad and iPhone devices. The first post covered the basic process of converting your Xcode project to run under OS 3.2. The second post covered some general refactoring advice which you should consider before getting too far into iPad specific changes. Finally are my notes on adopting the new UI elements introduced in OS 3.2 for the iPad.

It is fairly easy to get something up and running on the iPad that looks better than the pixel doubling horror that pre OS 3.2 apps suffer by default. However to really make use of the larger screen size of the iPad and create a polished interface takes a bit more work. A typical iPhone application makes use of a navigation and/or tab bar to transition between single views that take up the whole screen. This basic design no longer holds on the iPad and has a number of implications for your controller code.

The basic strategy when converting to a universal app is to try to reduce the number of levels in your view hierarchy. On the much larger device sliding full screen views in and out as you drill down a deep view hierarchy is best avoided. The much larger screen size means you can display more information, something that Apple has made easier by introducing new UI elements such as the Split View Controller and the Popover.

The Split View Controller together with its close companion the popover are the two most obvious new elements introduced in iPhone OS 3.2. Except for simple utility style apps it is likely to be first controller that is loaded in any iPad app. 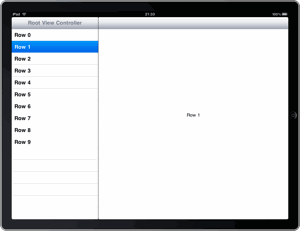 Remember that iPad apps should support all orientations so you need to consider how the UI will work in both portrait and landscape modes. If you are converting an existing iPhone app that uses a navigation bar the obvious choice is to make your existing root view controller the master view and the next view controller in your navigation hierarchy the detail view. Note that the Split View Controller will only handle two view controllers, you cannot and should not put more (or less) than two controllers into its NSArray.

To get started add an instance variable to your application delegate to hold a reference to the UISplitViewController and add an IBOutlet property as follows:

Modify your MainWindow-iPad.xib and delete your existing view controllers from the NIB and drag a UISplitViewController from the library. You then need to wire up the outlet from your application delegate and set the master and detail view controllers.

The UI_USER_INTERFACE_IDIOM() == UIUserInterfaceIdiomPad test can be used anywhere you need to determine if you are running on an iPad.

When using the UISplitViewController both controllers are loaded (in landscape mode) when the app launches and will stay displayed as the user selects different items in the master view controller. This has two immediate implications:

In the above example the updateDetail method is defined in the detailViewController and will update the detail view when running on the iPad. This approach works well for simple applications but it does hard code the master-detail relationship into the two controllers. You also need to make the connection from the master controller in the NIB file which is not always convenient. As an alternative you can also consider using notifications to communicate changes to the detail view.

Two methods defined by the UISplitViewControllerDelegate inform the detailViewController when the master view controller appears and disappears as the user rotates the device between landscape and portrait modes.

One additional thing you should do is remove the popover whenever the user selects an item from it. This is easier enough to do in the same updateDetail method we were calling from the master view controller earlier.

Separating the iPad and iPhone delegates

One final comment as you work your way through your view controllers. You may hit a point where the amount of conditional code starts to make your controllers a mess. You may also find that you really do want seperate views for the iPhone and iPad to take advantage of the greater screen size on the iPad. In that case you may be best to split your application delegates completely and use device specific controllers in places where the interface is no longer shared. The Xcode universal app template provides a good example of how to do this by hooking up different app delegate classes to the iPhone and iPad MainWindow NIB files and then separating code into iPhone, iPad or shared trees: 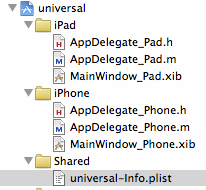