It is easy to forget but Auto Layout does not use the view frame when positioning views. It uses the view alignment rectangle. Most of the time you do not need to worry about alignment rectangles as they match the view frame. It gets more interesting when you have a view that includes a drop shadow or glow effect or some other non-content addition such as a badge which can throw the default alignment off.

This post looks at how to define custom alignment rectangles to tell Auto Layout how to align such views.

When The Default Is Not Enough

Take a look at this image view which has an exaggerated 30 point drop shadow to make it easier to see the problem:

I have superimposed red lines to show the horizontal and vertical center lines of the view. The view has constraints to center it in the super view but the view content which is just the green box is clearly not centered. What is going on and how do we fix it?

Since Xcode 10.2 the Interface Builder canvas correctly shows any custom alignment rectangle we set. Make sure you have turned on layout rectangles in the Xcode menu (Editor > Canvas > Layout Rectangles):

You can also turn on the UIView debug mode to show the alignment rectangles at run time. In the Xcode scheme editor (⌘<), add the launch argument UIViewShowAlignmentRects with a value of YES and don’t forget the leading -:

The alignment rectangle for the image view is now highlighted in yellow when we run. Note how it matches the view frame including the drop shadow:

You can see that Auto Layout is centering the yellow alignment rectangle in the view. It does not know we want the green box which is our content centered. To ignore the drop shadow we need a new alignment rect that’s inset from the image frame on the bottom and right by 30 points: 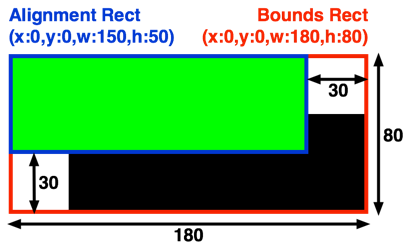 If you’re storing the image in the Xcode Asset Catalog you can directly change its alignment rectangle. Use the attributes inspector to add 30 points of inset to the bottom and right:

Let’s extend UIImageView with a convenience initializer that allows us to include the insets:

In our view controller we can then create our image view and add it to the view hierarchy: