I have tried all of the recent attempts by Apple to make a decent mouse and by “decent” I mean functional as well as good to look at. The prettiest mouse in the world is of no use if it does not work well as a mouse. So maybe finally at the third attempt I have achieved Apple mouse nirvana… 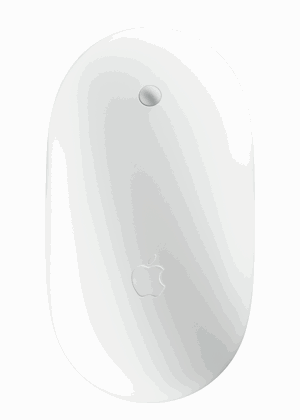 About three years ago my shiny new iMac came with a bluetooth Apple Mighty Mouse. The mouse was fine, the shape was comfortable but the tiny scroll ball was forever getting clogged making it extremely frustrating to use…

From Mighty to Magic

When Apple announced the Magic Mouse it seemed they had come up with the perfect solution to clogged scroll wheels by eliminating all of the moving parts and making the surface multi-touch. Unfortunately I found it uncomfortable to use and whilst I liked the scrolling and swiping gestures I would often find I would send a window scrolling up or down as I lifted my hand off the mouse…

And Finally The Magic Trackpad

For the last month I have been using the magic trackpad and I have to say that finally I think Apple has come up with something that both looks good and actually works great. If you already have an Apple MacBook then you know how to use the trackpad. The whole surface is actually a button but I find I never use it to click. I have the preferences set so that a single tap simulates a click whereas a two finger tap creates a right-click.

Other gestures that I really like are the two finger scrolling and dragging both of which seem very natural once you get past the initial learning curve. Since the trackpad is static I find it much easier to use on a cluttered desk compared to a mouse as it is always in the same place off to the right of my keyboard.

I found with the mighty and magic mice my rechargeable batteries would last about a week as long as I remembered to turn the mouse off every night. With the trackpad, one month on, I am still using the original batteries and they still show 63% of charge remaining. I no longer even bother to turn it off since it seems pretty good at sleeping and waking up when I need it.

Since this is an Apple product it is not cheap compared to a standard mouse so it is worth trying it out in the Apple store first. Given the mixed reaction that Apple mice receive it may not be saying much but I think the magic trackpad is the best mouse that Apple has made so far.