When Apple introduced SwiftUI at WWDC 2019 it seemed like the beginning of the end for storyboards. Unfortunately you still needed a launch storyboard for the system to show while your app launches. That changes with Xcode 12 and iOS 14. 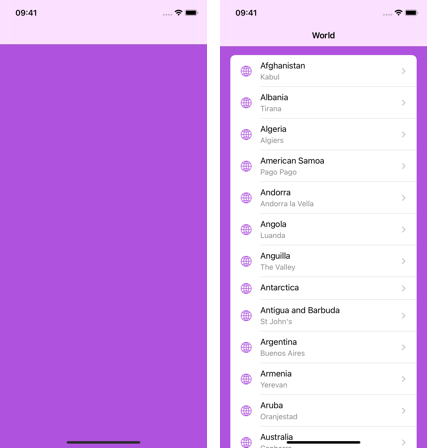 Since iOS 8, the recommended way to create the launch image was to use a launch screen storyboard. This is flexible enough that a single storyboard can adapt to different device sizes and environments. (Apple deprecated static launch images in the asset catalog in June 2020).

If you’ve switched to SwiftUI or simply don’t like storyboards you might be wishing you could ditch the last remaining storyboard in your project. Starting with iOS 14 that becomes possible (assuming you can drop support for iOS 13).

Apple wants you to keep your launch image simple. It should look like the first screen of your app so the user sees a smooth transition during launch. If you follow that approach it’s likely you can get away with not using a launch storyboard and define the launch screen in the Info.plist file for the target.

For example, to create the launch screen I showed above with a purple background (defined in the asset catalog) and a navigation bar:

Here’s a summary of the settings keys you can use to create your launch screen:

In my example above I have a URL scheme defined for my app with the identifier “facts”:

Should You Migrate From A Launch Storyboard?

If you do switch, remember to delete the “Launch screen interface file base name” (UILaunchStoryboardName) key from the Info.plist file of the target or the system will ignore the UILaunchScreen setting: